A native of Tilden, Neb., Kent has been with the utility for 30 years, including the last nine years in his current position. He replaces Pat Pope who announced in February he was stepping down from his position at the end of April and will focus on e-connectivity and future generation strategies for NPPD as a special assistant to the CEO.

“It’s an honor to be selected by the Board to serve as the next CEO of NPPD. I have been very fortunate over my career to work in many parts of the District, and I have experienced first-hand the talent and dedication of my teammates across the state to providing low-cost, highly reliable energy and outstanding service to our customers,” Kent remarked after the Board’s decision.

“The strength of public power is our direct accountability to our customers through a publicly elected Board of Directors. NPPD, under the guidance of our Board, CEO Pope, and previous CEOs, has delivered outstanding results for our fellow Nebraskans for 50 years. I look forward to leading this talented team as we continue to transform our organization to meet the changing needs of our customers for the next 50 years and beyond.

“As board members, we have had the opportunity to observe Tom’s knowledge, leadership and integrity and the Board’s executive committee felt strongly that he is the right person to succeed Pat Pope,” commented NPPD Board Chair Barry DeKay. “We believe it is important to develop leadership internally so that we have potential successors who know our organization, our culture, our customers and our employees. Tom brought us these attributes.’

During the past nine years Kent has provided executive leadership over NPPD’s non-nuclear operations and has overseen more than $700 million of new investment in NPPD’s transmission system. He also serves as the District’s Chief Electric Reliability Compliance Officer accountable for compliance with the North American Electric Reliability Corporation reliability and cyber-security standards.

A key effort during his recent tenure was leading a negotiating team responsible for attracting Monolith Materials to Nebraska. That operation will become the largest electrical load in the state when fully operational and will provide an opportunity for NPPD to reduce carbon emissions by approximately 10% by using hydrogen produced in Monolith’s manufacturing process as a fuel for generating electricity.

“The move by Monolith Materials to Nebraska is certainly an economic driver for the state,” Kent commented, noting that the first unit of that facility is nearing completion and will soon be in operation. “Our next step in this process is to complete the design and engineering of the conversion at Sheldon Station and eventually begin operations where hydrogen is used as a fuel in generating electricity and replacing coal.”

Prior to his recent position, Kent was the Transmission and Distribution Manager and also the Corporate Planning and Risk Manager. He has held numerous positions across the District in Columbus, Scottsbluff, Ogallala and at Cooper Nuclear Station. Kent is a veteran of the US Navy having served as an instructor at the Naval Nuclear Power School. He is also a graduate of the Reactor Technology Course for Utility Executives through the Massachusetts Institute of Technology.

He is a registered professional electrical engineer in the State of Nebraska and holds a Bachelor of Science degree in Electrical Engineering and a Master of Business Administration degree from the University of Nebraska-Lincoln. He recently chaired the Southwest Power Pool’s Holistic Integrated Tariff Team and serves on the Members Committee and Human Resources Committee. He currently is the Chair of the Board of Directors of the Midwest Reliability Organization and serves on the Board of Directors of RMEL, an energy trade association.

Away from the industry, Kent is an active volunteer with the Mid-America Council of the Boy Scouts of America, where he was awarded the Silver Beaver Award for distinguished service to youth and serves on the Council Board of Directors.

He and his wife, Dacia, reside in Columbus. 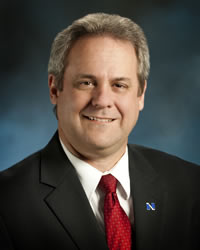