Supply Chain Mitigation: In It Together

Supply chain issues are an unfortunate sign of the times. Whether it’s a longer wait to receive the new kitchen cabinets for your remodel, higher prices or limited availability of your favorite foods or longer Amazon shipping times, it’s something we’ve all experienced to some degree. Within the electric industry, we are facing similar challenges, and not one utility in the nation is immune.

If you’re someone who enjoys exploring the various communities that make up our great state, you’re bound to appreciate their endearing nuances and hidden gems.

Honoring all who served

Veterans Day, a time in which we honor the service of all men and women who have served or are serving in the U.S. armed forces.

To any outsider looking in, Nebraska might be mistaken as little more than a flyover state. Pass through on the Interstate and one is easily under the impression it’s flat as a pancake with only cornfields as far as the eye can see. Spend a little time here, though, and they start to experience what true Nebraskans have always known.

Building up our communities

A pop of orange and blue, and a promise to you

Colors are so entwined with our psychological and physical health there’s literally a science to it. If you’re “yellow,” you’re scared. Maybe you’re a romantic who sees the world through “rose-colored glasses.” It’s why you paint your office green for improved motivation and focus, or why you’re pulled toward vibrant reds if you’re impulsive or passionate (hello, Husker fans)!

My journey from ’69 Ford Mustang to Mach-E

Space-age stories used to be a thing of fiction. I grew up watching the Jetsons and Star Trek, lost in the daydream of it all as a child. Then I saw Neil Armstrong take his first steps on the moon. Now, as the race toward space tourism quickens and folks are launched 50 miles above our atmosphere in rocket planes, I’m left in awe at how fast technology is advancing in all areas of life.

Immerse yourself in nature on the Cowboy Trail

321 miles. That’s the length of Nebraska’s Cowboy Trail which stretches from Norfolk to Chadron. If you enjoy walking, biking or horseback riding, an adventure on the nation’s longest Rail-Trail project is in order! Explorers can take in relics from the past, including old telegraph poles and the only brick depot remaining in O’Neill, as well as more than 200 unique bridges (for those who love architecture as much as me).

This popular turn of phrase was derived from the fact more than 87% of an iceberg’s volume is underwater. Though we may see an impressive, massive hunk of ice, we really only have a glimpse of a much bigger picture.

When the power goes down, they go up

A crack of thunder. The roaring downpour of rain. Jagged streaks of lightning racing across a darkened sky.

The first days of spring-like temperatures are so gratifying. Free of layer after layer of outerwear, I step outside and welcome the sun’s warmth on my face. It’s literally a breath of fresh air! But it wasn’t long ago Nebraskans were asked to conserve their energy use, endure hour-long rolling outages and hunker down as sub-zero temperatures swept across the Midwest. 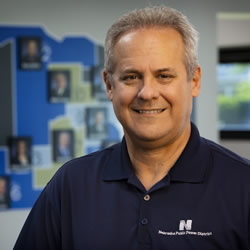 Thomas J. Kent graduated from the University of Nebraska-Lincoln with a bachelor’s degree in Electrical Engineering in 1985 and a master’s degree in Business Administration in 2005. He completed the Institute of Nuclear Power Operations (INPO) reactor technology course for utility executives at the Massachusetts Institute of Technology. Kent is a veteran of the United States Navy. He joined the District in May 1990 as an environmental qualification coordinator at Cooper Nuclear Station, and he has served in many positions during his more than 30-year career. Kent serves as a board of director for several energy- and community-related organizations, including the Nuclear Energy Institute, the Nebraska Chamber of Commerce & Industry, the Nebraska Power Association, the Mid-America Council - Boy Scouts of America, the Large Public Power Council, the American Public Power Council, and The Energy Authority as vice chair. He currently serves on the Southwest Power Pool Members Committee, and he is a certified high school football official in the state of Nebraska. He was appointed NPPD president and chief executive officer on May 1, 2020.