Gary Thompson to lead NPPD Board in 2019

Columbus, Neb. - Gary Thompson, a 26-year member of the Board of Directors of the Nebraska Public Power District, was elected as the Board’s chair for a second consecutive year following action taken during the utility’s monthly meeting. Thompson, a resident of Clatonia, was a long-time resident of Beatrice.

“Being re-elected to this position for a second consecutive year is an honor and I appreciate the support of my fellow Board members,” Thompson stated. “Public power continues to be an essential ingredient to the economic strength of Nebraska. We have a strong agenda of issues to address over the next year that will be challenging.”

He represents Subdivision 8, which consists of all or parts of Nuckolls, Thayer, Fillmore, Saline, Jefferson, Gage, Johnson, Pawnee,Richardson and Nemaha counties. 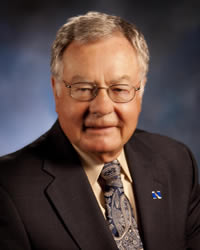